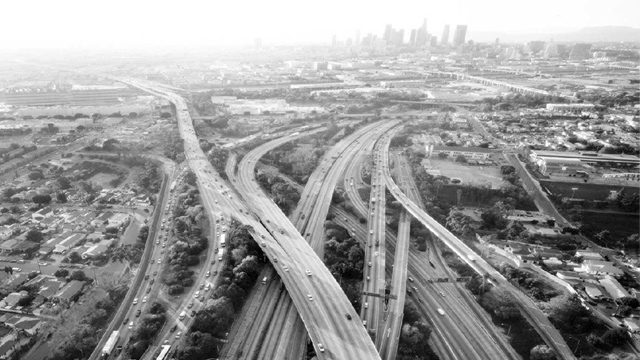 For several years, San Francisco-based photographer Michael Light has been flying his own lightweight aircraft to document the American West from the air. His latest book, LA Day/LA Night, shows off the beauty and horror of the City of Angels in equal measure. Whereas the nighttime photos carry a celestial, almost heavenly feel, the daytime images — a selection of which are shown here — are washed out in sunlight, capturing the city’s harsh and unforgiving character. But, ultimately, the commentary is neutral, as Light explained to Details.

I almost think of it as a kind of glyphics, a writing on the land that we do. A road is a sentence, a road is a language. The more I see, and the older I get, I try not to be utterly condemnatory of human endeavor. We’re magical beings. We’re capable of extraordinary things. Our downfall is that we don’t tend to take responsibility for what we so extraordinarily do. That’s really the root of it, right there. But I want these pictures to be as much love letters as they are condemnations.