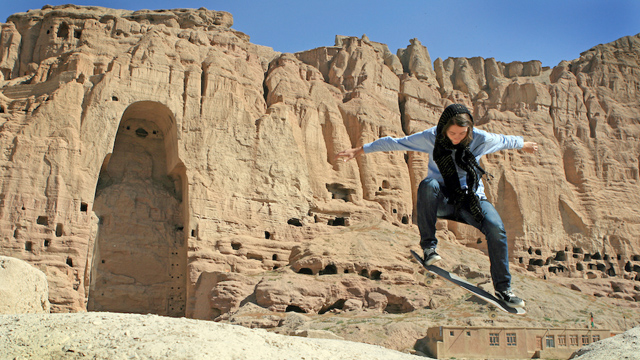 Seven years ago, Australian skateboarder Oliver Percovich sparked a commotion on the streets of Kabul and inadvertently started a gender revolution. His board and four wheels attracted the attention of the kids around him, most of whom had never seen a skateboard before. He noticed something else: The girls were interested, too.

Skateistan began in 2007 when Percovich discovered a perfect spot to skate at the weekend—Mekroyan Fountain, an abandoned, Russian-era concrete relic located in the heart of Kabul. As the local kids began to congregate, to watch and to join in, a quick stop-off to visit his girlfriend turned into a lifelong commitment to stay.

Percovich channelled his efforts into the creation of a non-profit skate school in Afghanistan in 2009. They now have two: one in Kabul, the other in Mazar-e-Sharif in the north, near the border with Uzbekistan. The goal is simple: to use skateboarding as a tool for empowerment in a country worn away by 30 years of conflict and dislocation. The children come for skateboarding, they stay for education.

But what makes Skateistan even more special is that 45 percent of their 800 students are girls. When 19-year-old Nelofar steps on a skateboard and flies down the big ramp she tells me she feels “very brave and very strong.” She feels free.

“I like the 360 flip, that’s very amazing,” she laughs. Looking at Nelofar, wide-eyed with enthusiasm as she Skypes me from Mazar-e-Sharif’s Skateistan school, I tell her I think she’s pretty brave, too.

UNICEF identifies Afghanistan as one of the worst places to be born a woman in the world. Of the 4 million children not enrolled in school, 60 percent are girls. And, as international forces continue to withdraw from Afghanistan, violence against women is still prevalent. When Nelofar steps on a skateboard, she’s breaking gender boundaries.

These boundaries in Afghanistan are mainly set by social convention and enforced by family loyalty and tradition. “The father sets the rules to protect the honor of the family,” Skateistan’s Communications Manager Alix Buck explains. “There will be conflict sometimes, for sure.”

Skateistan found the ultimate loophole when they discovered that skateboarding is still a fairly unknown sport in Afghanistan. Cycling, football and kite-flying might be socially taboo for girls in 2015, but no one quite knows what these boards with wheels actually are. “It’s perceived more as a game than a sport,” says Buck. Ignorance is most definitely bliss for Nelofar and the 400 girls who get on their boards and fly down the Skateistan ramps every week in their colorful headscarves.

“Before coming here I didn’t know about the skaters,” Nelofar says. “I heard on television about the skiing, but not the skates!” Encouraged by her aunt, she came down to the Skateistan school to check out the skaters for herself. “I was wondering how they could come down from the big ramp and not fall on the ground and was thinking they would have something on their feet to keep their body on the skateboard. It was very amazing.” She can’t stop smiling as she talks.

Now, 18 months later, Nelofar isn’t just a shit-hot skater—she also works for Skateistan, specializing in student administration and media, and is studying to be a doctor.