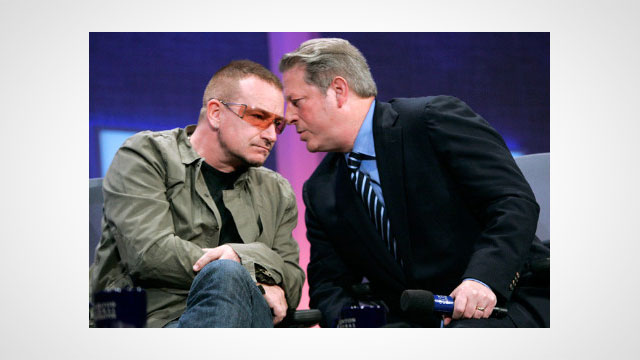 Never one to withhold his opinion on how everyone should make the world a better place, Irish rocker Bono proffered ten ideas with the potential to change the world in a recent op-ed piece in the New York Times. Among them is the "equal right to pollute" idea, a controversial climate change solution which is a sort of spin on the "cap-and'trade" idea. Says the singer:

"In the recent climate talks in Copenhagen, it was no surprise that developing countries objected to taking their feet off the pedal of their own carbon-paced growth; after all, they played little part in building the congested eight-lane highway of a problem that the world faces now.

One smart suggestion Iâ€™ve heard, sort of a riff on cap-and-trade, is that each person has an equal right to pollute and that there might somehow be a way to monetize this. By this accounting, your average Ethiopian can sell her underpolluting ways (people in Ethiopia emit about 0.1 ton of carbon a year) to the average American (about 20 tons a year) and use the proceeds to deal with the effects of climate change (like drought), educate her kids and send them to university. (Trust in capitalism â€” weâ€™ll find a way.) As a mild green, I like the idea, though itâ€™s controversial in militant, khaki-green quarters. And yes, real economists would prefer to tax carbon at the source, but so far the political will is not there. If it were me, Iâ€™d close the deal before the rising nations want it backdated."

Read the whole piece at NYT.