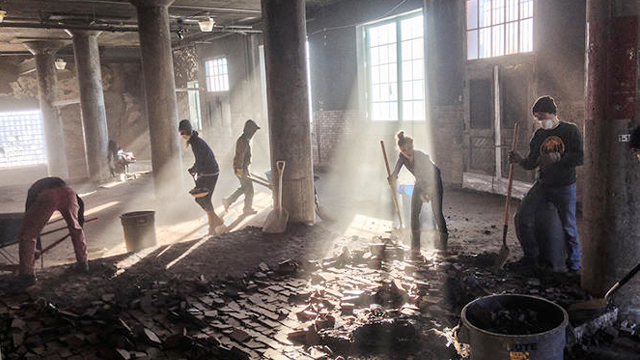 In 2010, entrepreneur John Edel bought a four-story, 94,000 square foot factory in a bankruptcy sale. The sprawling red brick warehouse, built in the 1920s next to Chicago’s Union Stockyards, used to process bacon and ham. Today it is home to The Plant Chicago, a vertical farm housing 11 small-scale food businesses, from bakers and kombucha brewers to aquaponic farms growing greens and fish for area restaurants.

Not only is Edel showing skeptics that urban indoor farming can work, he’s working hard to prove that it can be fueled by garbage itself. With a grant from the State of Illinois, he’s installing a giant anaerobic digester that will convert food waste into biogas. When the digester is completed later this year, The Plant will also taking on more food waste from the neighborhood to turn it into power. “We’ll eventually be consuming about 30 tons of food waste per day from local food businesses like grocery stores and breweries,” Edel said.

The businesses inside are quickly growing. Greens and Gills, a business that produces salad greens and herbs along with fish, has expanded rapidly since it moved into the building. “They had to double their production space because of demand, which effectively proves the concept of growing 100% under artificial light in a building,” Edel says. “They’re one of the first to do this at a big scale.”

Edel calls the whole operation a “social enterprise,” and hopes to create a replicable model of closed-loop, net-zero urban food production. The way things are going, it seems likely he will pull it off.