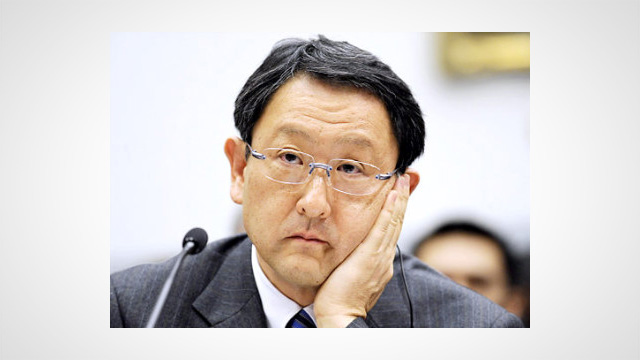 In Washington Wednesday, embattled Toyota president Akio Toyoda testified to Congress, saying he was "deeply sorry" for the carnage caused by faulty brakes and accelerators in his cars.

â€œWe pursued growth over the speed at which we were able to develop our people and our organization, and we should sincerely be mindful of that," Toyoda said, "I regret that this has resulted in the safety issues described in the recalls we face today, and I am deeply sorry for any accidents that Toyota drivers have experienced.â€

But lawmakers weren't satisfied with Toyoda's level of remorse, nor with his evasiveness around particular questions.

As reported in the Daily News, "Toyoda repeatedly frustrated members of the House Oversight Committee demanding to learn "what he knew and when he knew it" about the problems that forced millions of recalls. His buttoned-down demeanor contrasted with the relative of four victims who struggled to speak through her tears."

Given how poorly the company handled the situation in the immediate term, you have to wonder why Toyoda didn't bend over backwards to meet every question head on.

"In the court of public opinion, judgments are handed down by consumers the moment that news breaks of a flaw in quality or service," wrote Bill George in Huffington Post. "In the case of Toyoda, he has ducked the public eye and hesitated for so long that many people have already made negative judgments about his leadership and his company's handling of the crisis."

The company's mishandling of the crisis shouldn't be surprising, perhaps. As a nation, the Japanese are obsessed with craftsmanship and quality, so owning up to product defects doesn't come easy, particularly for an eminent company like Toyota.

Over the past few months, more than eight million Toyota vehicles have been recalled worldwide due to a variety of acceleration and braking problems. That includes the Prius hybrid, which went through a recent recall for troubles with its braking system's software.