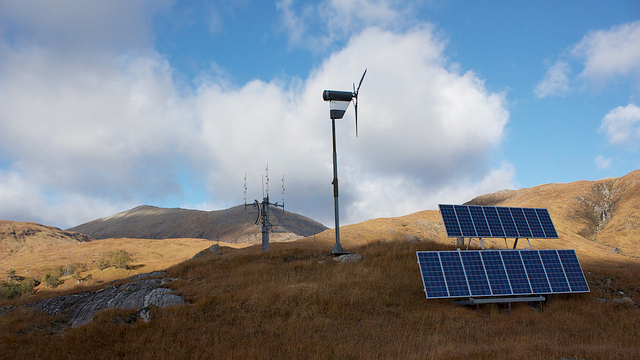 Sigh. Bjørn Lomborg has once again been given a fact-checker free podium — and has left it fact free. His latest salvo in The New York Times claims that the world’s three billion poorest — who, lacking access to modern energy, light with kerosene and cook with wood — must suffer through nineteenth century coal and twentieth century oil to advance — because coal and oil are — cheap!

In Bjørn’s world, climate is tomorrow’s problem, which must wait until we solve today’s, poverty. Cheap and available fossil fuels are going to lift the poor. Clean energy which might solve the climate crisis is not up to the job.

Climate as tomorrow’s problem ignores the people of Tacloban and the rest of the Philippines, whose chief climate negotiator, Naderev Sano, launched an emotional hunger strike at the recent Warsaw Climate summit to “stop this madness” — Lomborg’s prescription of continued inaction on climate. Climate as tomorrow’s problem ignores Central Africans dying of drought, Bangladeshi’s losing their fields to rising sea levels, even residents of coastal New Jersey unable to safely rebuild because the shoreline has become an aggressively advancing enemy.

Lomborg either doesn’t know or doesn’t care what he is talking about. He argues that “What those living in energy poverty need are reliable, low-cost fossil fuels.” That would be nice — but such fuels are not available, except in Lomborg land.

Fossil fuel as cheap? Oil is at $100/barrel, and imported coal, of the kind that India, Pakistan and Africa are now reaching for, costs $90/ton — both triple what they were only a decade ago. At those prices electricity from oil costs $0.35, from coal $.10 while wind in China costs only $0.07 and solar in California only $.08.

These economics are reflected in energy trends in industrial nations.This week the EU revealed that its consumption of coal declined by 8 percent last year, with wind, solar and hydro taking up the slack, while the Sierra Club tallied up the benchmark that 30 percent of U.S. coal plants currently operating have announced that they will shut down in the next few years. And in China yet another province — Zhejian, a heavily industrialized Yangtse River region which currently burns as much coal as all of Germany — announced it would allow no more new coal plant approvals.

Lomborg derides renewables as tomorrow’s solution, not yet ready — when in fact they are already cheaper than the fossils he applauds, and are already taking the place of fossils in countries where bitter experience with the pollution and other costs of dirty energy are driving change.

He laments that 3.5 million of the poor die each year from indoor air pollution, seemingly oblivious to the reality that about half of them die from an available, but not cheap, fossil fuel — kerosene — and the other half die from burning wood precisely because LPG, a cleaner middle class cooking fuel, is too expensive.

What raises the price of coal and oil? Wasteful consumption by the rich, a habit Lomborg never stops to snipe at. Instead he argues that fossil fuels “are the only means to lift people out of the smoke and darkness of energy poverty.” Fact not in evidence, Bjorn.

Fossil fuels as available? Another Lomborg myth. It is not climate concerns that deny villagers power. There are no wires. At today’s copper and coal prices bringing grid power to a village only 8 miles from the grid costs $.25/kwh – more even than rooftop solar, which Lomborg despises. Expensive fossil electricity cannot light remote villages — even the International Energy Agency says that 2/3 of the energy access job must be done by remote renewables.

Lomborg complains that the U.S. is trying to get development banks like the World Bank and the Export-Import Bank to find better solutions than coal. Never mind that none of the last decade’s investments by these banks in coal plants have made any meaningful contribution to energy access for the poor. We still should stick with a pathway is a proven failure. The latest coal project approved by such a bank – over a courageous “no” vote from the U.S. — is Pakistan’s Jamshoro project. But Jamshoro is not intended to light off-grid villages — it is designed to spare Pakistan the cost of burning oil to power its industries and cities- a slightly cheaper fossil fuel to replace another.

Why, since wind and solar are cheaper than coal and oil, and those fuels are widely available in poor countries, do we still have 3 billion people in energy poverty? Quite simply because government, aid agencies and development banks have historically refused to provide finance for renewable energy for the poor on the same terms they provided it for fossil energy for industry and the middle class.

Solar is cheaper than kerosene per day — but you have to pay it by the decade if you are a villager. Buying your generating capacity and grid up front is something no middle class American does when they move into a home. But instead of going after the outrage that neither their own governments nor the world community has yet to admit that the poor will remain in energy poverty as long as we refuse them energy finance, Lomborg points the finger at climate advocates.

“Many people feel uncomfortable facing up to the undeniable need for more cheap and reliable power in the developing world.” Well, yes. But it not renewables advocates who suffer from this blindness. It is Bjørn himself. After all, two decades ago, when fossil fuels were still cheap, the world’s leaders refused to make the investments that would have lifted the poor out of energy poverty. Now that fossil fuels are exorbitant, because the rich overuse them so heavily, and so drive up the price, the only pathway for the poor is a low carbon pathway – they simply cannot compete with the rich for ever more expensive sources of coal and oil.

So it is in fact Lomborg whose approach would deny the poor access and finance to the only affordable energy on today’s market available at a scale that will meet the need he so vociferously points to — the clean stuff, distributed renewables.

Carl Pope is former Executive Director of the Sierra Club and the principal advisor at Inside Straight Strategies.