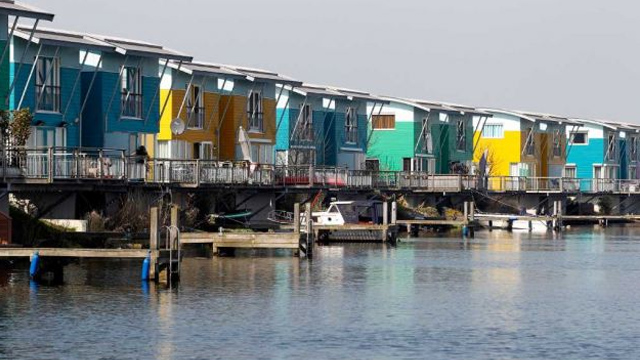 From unpredictable floods to rising sea levels, the earth-altering phenomena induced by climate change are changing the way humans coexist with water. Urged on by the demands of global warming, architects and city planners are responding to the challenge with buildings that sit on or above the shifting seas.

Aqua-architecture has a long history in the Netherlands (a full third of the country sits under water) and Dutch planners and architects are leading the charge today. Cutting edge projects in the Netherlands include a floating prison, a maritime estate and greenhouses. Now, the Dutch are exporting their knowledge to other watery countries like Indonesia, China, Thailand, Dubai and the Maldives (the world’s lowest country, with a maximum elevation of about 8 feet).

“The focus on floating solutions has grown enormously. It has shifted from freak architecture to more sustainable, flexible alternatives,” says Dutch architect Koen Olthuis of Waterstudio.

For Olthius, that means working with water rather than trying to defend against it. In an AP article, Denis D. Gray explains:

Following the principles of “water will always find its way” and “collaborating with nature,” the Dutch have reversed some of their earlier strategy of tightly defending their land with dikes by allowing the sea to penetrate some areas on which housing has been constructed.

A groundbreaking instance of this approach can be found on the River Maas in the Netherlands, where a community of floating homes built in 2005 survived major floods in 2011, a catastrophe that forced the evacuation of villages in many other areas.