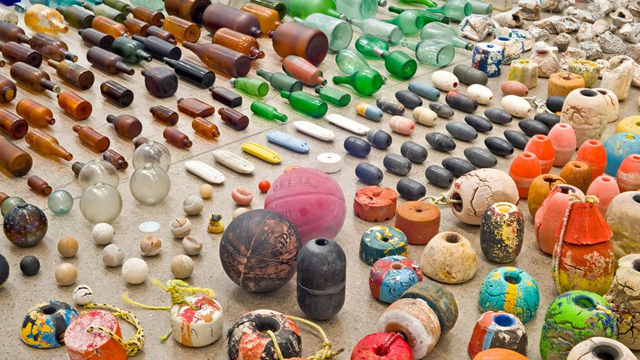 In his hotly anticipated new show at the Guggenheim Museum, Mexican-American artist Gabriel Orozco explores the fertile territory where nature and humanity intersect. The exhibition, entitled Asterisms, is a two-part sculptural and photographic installation comprising thousands of items of trash that he collected from a playing field near his home in New York and a protected coastal biosphere in Baja California Sur, Mexico — a zone that acts as a repository for flows of industrial and commercial waste from across the Pacific Ocean.

The main installation, “Sandstars,” is a large-scale sculptural piece comprised of of nearly 1,200 pieces of detritus Orozco collected from Isla Arena, Mexico. The objects include plastic buoys, tennis balls, glass bottles, incandescent light bulbs, wooden oars, screws, hinges, styrofoam, and hardhats that the artist assembled in a taxonomic arrangement on the gallery floor. The three-dimensional work is accompanied by twelve large-scale gridded photographs which depict the individual pieces he has accumulated, captured within the studio setting, and organized typologically.