Goth of the Bay 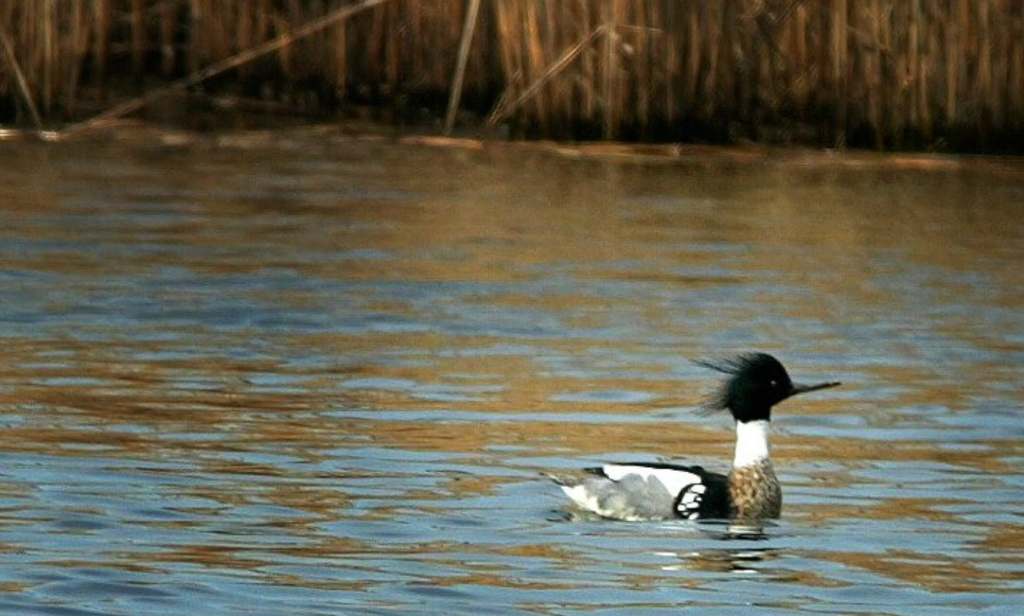 I remember spotting my first red-breasted merganser in Brooklyn as it paddled along the bulkheads lining Jamaica Bay. It was a strangely warm February day, snow lingered amid the shoreline grasses and the bird peeked in and out of a drifting, intermittent fog. I was an excited young bird-watcher, and any bird was worth looking up in one of the three field guides I carried with me.

I had been watching the duck as it joined a group of three or four others when it began behaving as if it were gagging. As he plunged his neck and chest into the water, he cocked his gaping, narrow bill up to the sky. This may or may not have impressed a mate, but it certainly impressed me. I was watching an ancient dance; a rite of spring. Unlike the chubby bufflehead ducks nearby, the mergansers were low-slung and long, and far more colorful. Turning to the page in the field guide where mergansers were illustrated, there was no mistaking that this was a male red-breasted.

I was amused by its punk hairdo. With a dark green head of shimmering, ragged feathers, the male’s profile reminded me of the artfully arranged mop of hair Robert Smith was popularizing a few years after I had become a duck enthusiast. Even the females sported this ragged look, but in warm brown. Back in the ’80s, when there was no such thing as too much hair gel, this seemed like a salute to pop culture. In addition to their mod coifs, the males had blood-red eyes, which were visible even without binoculars. The overall impression was that of a shameless Lothario, dressed to kill.

Mergansers are long and lean for good reason: they are expert fish hunters. As a group, they propel themselves through the water using powerful legs with their webbed feet, generally making little or no use of their wings once underwater. Mergansers also have long, thin, specially adapted bills; these are sharp-edged and serrated, the better to capture and hold slippery, wriggling prey. MORE

Via: The New York Times