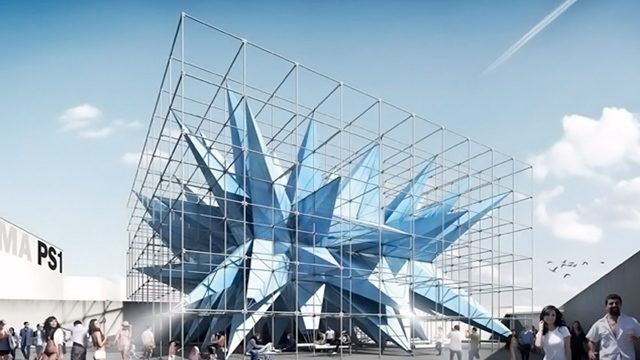 The winning entry of this year’s coveted Young Architects Program at MoMA PS1 is a massive, bright blue installation that absorbs air pollution. Dubbed “Wendy” by architects HWKN (HollwichKushner), the 5,000 square foot structure will sit in the MoMA PS1 courtyard during the museum’s Warm Up summer music series.

The star-shaped structure combines common materials (scaffolding) with revolutionary building technology in the form of “smog-eating paint” that actually removes pollution from the air surrounding it (!). How does it work? According to the architects, Wendy will be covered in a “nylon fabric treated with a ground breaking titania nanoparticle spray to neutralize airborne pollutants.” Over the summer, the architects say, it will absorb the smog equivalent to taking 260 cars off the road.

So why “Wendy”? HWKN principal Mark Kushner explained the story behind the name to Art Info:

We think of Wendy as a storm. All powerful storms have names. In a video that we’ll release shortly, we use that song by the Association called “Everyone Knows It’s Windy.” The storm kind of started to have a personality about it. We’re trying to change the game of architecture and be more proactive about speaking to people who use architecture but aren’t architects. Trying to change the game of architecture and being more proactive really speaks to people who use architecture who aren’t architects. We didn’t want to revert to traditional architectural naming devices, which tend to be an insider game, so we went the total opposite direction, to choosing one that anyone could say and start to fall in love with.