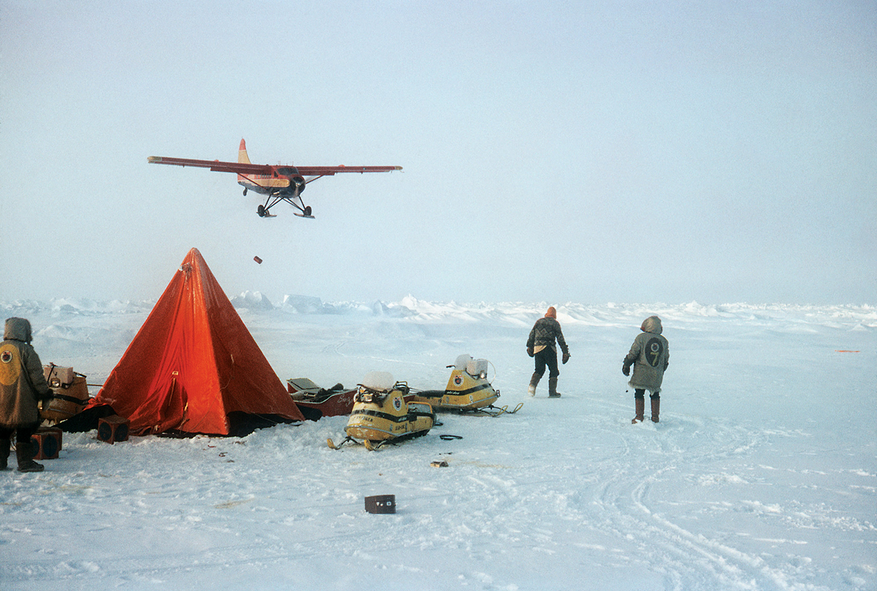 The twin-prop plane swung low, tilting its wings and heading north, only to circle back and swoop down over the men again.

It was March 7, 1968, and the members of the Plaisted Polar Expedition looked up at the plane in bewilderment. They were trying to travel to the North Pole by snowmobile — in what they believed to be the first expedition to the North Pole carried out on motorized machines, but what in reality may very well have been the first to reach the North Pole at all. Barely an hour into the trek, it wasn’t going well. Having just left base camp, the six men stood atop a 40-foot-high wall of ice at the edge of the Arctic Ocean and looked at what lay ahead: stretching over the horizon, an unending moonscape of ice boulders, crevices and pack ice contorted by vast floes whose constant motion created steep pressure ridges and black stretches of open water known as leads. Sounds came from the ice, ghoulish groans as floes shifted followed by artillerylike reports as the sheets collided, threatening to open a yawning divide beneath their feet at any moment. In the days ahead they would have to zigzag through a patchwork of pressure ridges and risk breaking through the frozen mantle and drowning in the glacial sea.

The scene before them was not what they imagined back in Minnesota, when a dare in a bar instigated the least likely polar expedition of all time. A group of average middle-aged suburban men — an insurance salesman, a mechanic, a doctor, an engineer — had joined forces with a young Canadian adventurer, scion of the snowmobile manufacturer Bombardier, which was sponsoring the voyage. The snowmobiles the men had brought to the Arctic were primitive 16-horsepower Ski-Doos, little more than riding lawn mowers with snow tracks. Now, only a few miles into the journey, the idea of going to the North Pole by snowmobile suddenly seemed dangerous, impossible, insane.

Just before the plane passed over for a third time, veering once again to their right, it dawned on the men that the pilot was trying to tell them something. The Twin Otter was supposed to resupply them as they progressed across the ice — gas, beer, steaks, smokes, all the necessities. But the pilot had apparently come to check on their progress on the first day of the voyage. A tiny red object flew out of the cockpit window, landing in a snowdrift. It was a box of cigarettes, with a note. ‘‘You’re 45 degrees off course,’’ it read. ‘‘Enter the pack here.’’

The expedition was just beginning, and they were headed in the wrong direction. As the plane disappeared to the south, the tiny, disoriented wagon train turned north, spirits low. They worked for hours in 60-below temperatures to lift their machines over a ridge of ice blocks. They progressed only 150 yards farther into the ice field by the end of the day — scarcely more than a football field. There were 415 miles to go, but the estimated total distance would be nearly double that once lateral travel to avoid obstacles was factored in. At this rate, they wouldn’t reach the pole by the time spring arrived to thaw half the Arctic Ocean.

The sky darkened and threatened a storm — a blow, in Arctic argot — and the men made camp. Walt Pederson, the mechanic, started to tinker with a snowmobile only to discover he’d forgotten his tools at base camp. They had left in extreme haste that day, at the insistence of the expedition leader, Ralph Plaisted. After they set up their tent, Plaisted cut a finger opening a tin of chocolate. Dr. Art Aufderheide, the medic, inspected the wound.

‘‘Looks like the suture kit and the medical bag didn’t get packed on the sled when we left,’’ Aufderheide said.

‘‘We’ve got all the radio equipment along, but nobody brought the generators,’’ Powellek replied.

Handing out soup in the frigid tent, the leader Plaisted sullenly admitted his own mistake.

The dialogue above comes from an odd account of the Plaisted expedition titled ‘‘First to the Pole.’’ On the copyright page of the book it is stated, ‘‘This is a work of fiction.’’ The book’s first words are ‘‘This is a true story.’’ Something I discovered when I stumbled on the snowmobilers’ tale: When dealing with the lore and literature of the North Pole, determining the precise truth of events can be surprisingly difficult. The book was written by multiple amateur authors, and Corinne Dwyer, the book’s publisher in St. Cloud, Minn., called it ‘‘creative nonfiction.’’ As I further reported the story, I realized that the book was in fact based on their diaries, as well as the recollections years later of the men involved. MORE