Mindblowing Images of Earth from Space 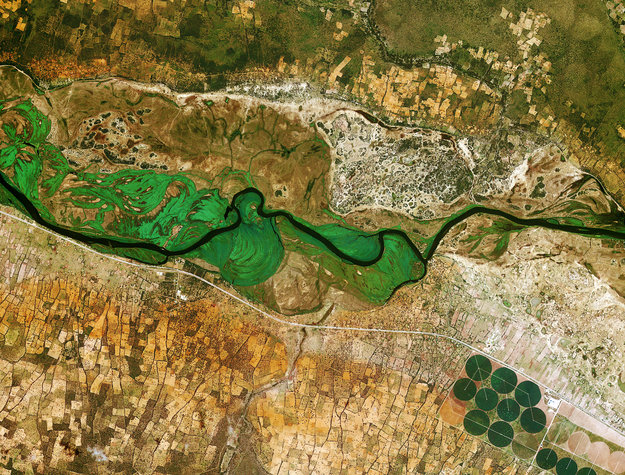 If you know us at all, you know that we love us some satellite images of Earth (see here, here, or here for proof). There’s nothing quite as humbling or mesmerizing as views of Earth as they appear from space.

The ESA archive contains thousands of snapshots from the European Space Agency’s satellites, with various sensors and cameras capturing myriad facets of the planet through different lenses.

View a small sampling above. Extra points for anyone who can guess what part of the planet is being depicted in any of the photos (answers below).

1. Running across the image, the Okavango River forms the border between Namibia to the south and Angola to the north (KARI/ESA)

2. The northern end of the Persian Gulf, along with the border of Iran and Iraq and the mouth of the Shatt al-Arab river (USGS/ESA)

3. The Tibesti Mountains, located mostly in Chad with the northern slopes extending into Libya (ESA)

4. Rolling hills of farmland in part of the Palouse Region in the northwest United States (KARI/ESA)

5. The sand seas of the Namib Desert (KARI/ESA)

6. In this false-color image of the Mississippi River delta, land vegetation appears pink, while the sediment in the surrounding waters are bright blue and green (USGS/ESA)