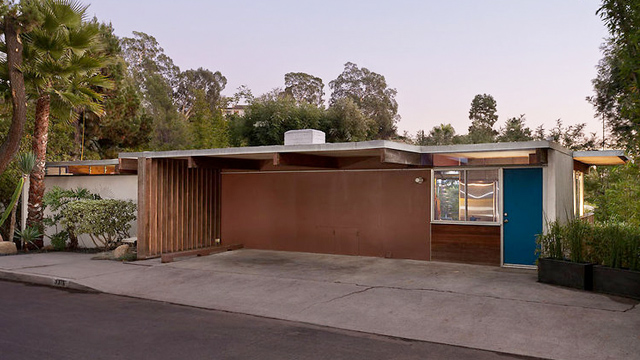 Great architects are rarely associated with modest homes. But the Hailey Residence, a 1,129-square-foot home in the Hollywood Hills, proves to be an exception to the rule. Designed in the late ’50s by none other than Richard Neutra, the house shows what a genius architect can do with a small canvas.

From the outside, the tiny structure looks like it would better serve as a shed–albeit one with clean, beautiful lines–than a house. But a step indoors reveals an airy atmosphere and plenty of space, despite its minimal square footage.

At Co.Design, Kyle VanHemert explains how the master architect pulled it off:

The two-bed, two-bath achieves the effect through “a plan which opens private space to public space,” as a recent real estate listing put it (it was recently sold, after a few months on the market at an asking price of $895,000). For one, the home includes a soft, moveable wall separating the den from the living area, essentially allowing the main living space to span the entirety of the house. It also features a floor-to-ceiling glass wall that lets the interior stretch out visually into the hills below.

The overall effect is a living space that feels spacious even though there isn’t much space to work with. And it proves that bigger isn’t always–or even often–better.