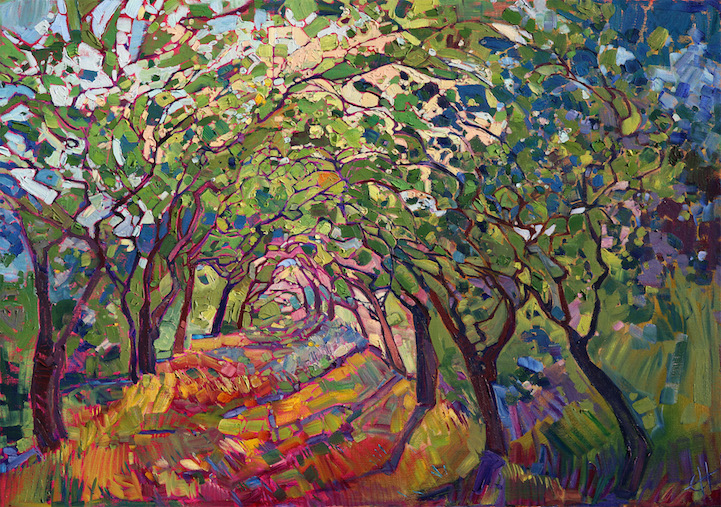 Artist Erin Hanson began to study oil painting when she was only eight years old. By the age of ten, she had completed her first paid commission. Her portfolio of work only grew from there, and after graduating from UC Berkeley, the creative established open-impressionism—her own distinct style of painting. Before long, other artists started emulating Hanson’s technique and she was credited as the inventor of this contemporary style. Since that time, Hanson’s continued to pursue her artistic passion, allowing the natural world to serve as inspiration. Locations such as Zion National Park, Canyon de Chelly, Monument Valley, Paso Robles, Joshua Tree National Park, and the Anza-Borrego desert have each played the part of “muse” as the painter aimed to create a painting every week.

You say that Red Rock Canyon inspired you to dedicate your life to one distinct form of art. Can you elaborate?

My style of painting is very chunky and abstracted. This style began when I was painting a lot of comic art and Japanese landscapes in ink while I was in college. When I moved to Las Vegas and started rock climbing every week, the obvious thing to paint was rocks… lots and lots of rocks, in all colors and shapes and lighting. The dark cracks in the rocks, separating out the flat planes of color, were easy and fun to paint, and my style developed from there. When I moved back to California several years ago, I decided that fluffy oak trees and winding rivers were really just like differently shaped rocks and I could apply my same technique to painting them. From there, an almost mosaic style of painting has evolved, which I like to call “Open Impressionism.”

There was a very definite and distinct moment when I became inspired to paint landscapes. It was when I was moving to Las Vegas, having never been there before, with my mattress tied to the top of my car, blowing awkwardly in the wind, my seats full of boxes, and knowing I was making a huge life change. One of the changes I wanted to make was getting back into art, but the postulate was vague and confused. Up until then I had painted everything from urbanscapes to pets to nude models in all sorts of mediums, from watercolors to pen and ink to giant 50-ft acrylic murals. Then I saw the sun set over the dramatic peaks and plateaus of the desert, their shapes abstract and delineated, the colors unbelievable. I decided in that moment that I could paint this landscape a thousand times, and I knew I would concentrate on landscapes exclusively and that the thick, chunky texture of oil would be my medium. MORE