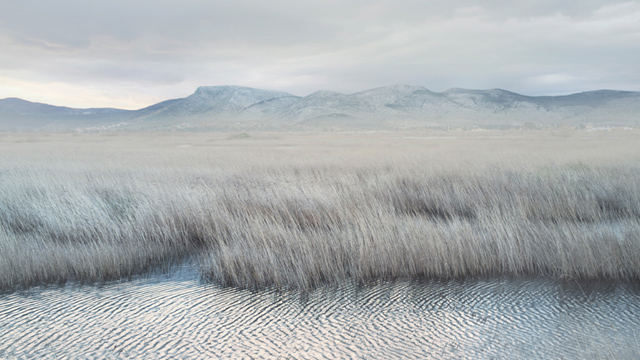 Petros Koublis explores “an alternate state of parallel time” in this collection of photos shot just outside Athens. The series, titled In Landscapes, features images of sweeping natural landscapes, where olive groves and meadows meet mountains and seas — places of silent beauty that stand in stark contrast to the turbid political and economic climate of a once thriving city. Athens, according to Koublis, is a city that “struggles to carry the weight of its own existence, facing a rather tough and tense present.”

The images of this project were made around the outskirts of Athens, less than 30 miles away from the heart of the capital. It is the area that surrounds the depressed city and all the millions of its citizens’ individual stories. Outside the invisible borders of the extended metropolitan area, in the land that lies behind the edge of the city, time seems to move parallel but in a different density. There is an inevitable contrast between the two states, a parable manifested by the discreet mystery that trees seem to hide among their branches and seas among their waves.