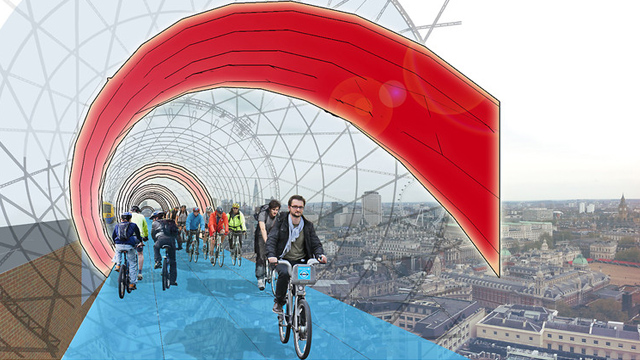 Mayor of London Boris Johnson, a man perhaps best known for a zip wire gaffe during the Olympics, may soon take to the skies again. This time, though, he’ll be on bike.

Johnson is reported to be considering an architect’s proposal for a network of elevated bike lanes between London’s mainline stations. Designed by Sam Martin of Exterior Architecture, the “SkyCycle” network would truly separate cyclists from city traffic. Under the proposal, cyclists could travel between train stations and pay a small fee (like a pound) to use the SkyCycle.

“There are many arguments for being separate from the city,” Martin says, “not only a different view, but different sounds, a different feeling of the city — a heightened experience. Excuse the pun.”