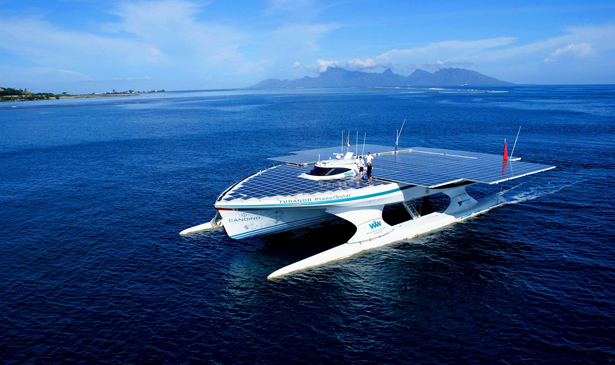 In September of 2010, the Tûranor PlanetSolar left its mooring in Monaco with the intent of becoming the first solar-powered boat to circumnavigate the globe. Last Friday, May 4, the 115-foot long catamaran fulfilled its mission when it returned to the same harbour to the delight of its crew and onlookers.

“The MS Tûranor PlanetSolar is much more than a ship,” Immo Stroeher, the the German entrepreneur who helped finance the $27 million vessel, told Wired. “It has become an ambassador of solar energy. The arrival in Monaco is only the start! We now have to take advantage of the fame of PlanetSolar in order to promote the use of solar energy.”

The 38,000 silicon solar cells power everything on the boat — from the motor to water systems to lighting — except for a small propane cooking stove. Planetsolar can produce up to 500 or 600 kiloWatts per hour in good weather. That’s enough to travel 186 miles when the battery is fully charged — using engines no more powerful than those on a scooter.

Raphaël Domjan, the Swiss engineer who designed the boat and who serves as its captain, hopes that the historic 600-day journey will herald a new era in eco-friendly travel.

“We have everything at our disposal: the know-how, technology, raw materials and renewable energy to become sustainable and protect the planet,” he said.