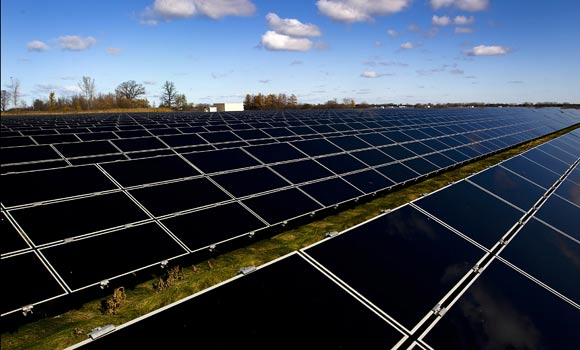 Tech breakthroughs in the solar energy industry continue to roll in. The latest, from a study published last week in Science Daily, may allow photovoltaic solar cells to double their efficiency, meaning panels will produce loads more electrical power from regular sunlight.

Until now, solar energy efficiency has been hampered by the fact that much of the energy delivered to photovoltaic panels comes in the form of “hot” electrons, which are too high-energy to be converted to electricity in silicon and are instead lost as heat. The new study, from University of Texas chemistry researcher Xiaoyang Zhu, found that an organic plastic semiconductor could double the number of electrons harvested out of one photon of sunlight. Whereas the max insolation-to-electricity efficiency of a silicon solar cell used today is considered to be about 31%, capturing those hot electrons could boost it to 66%.

The report comes on the heels of two other recent breakthroughs in solar tech. At the LA Times’ Greenspace blog, Dean Kuipers writes:

Breakthroughs in the solar industry seem to be coming fast of late. Just two weeks ago we heard about researcher Douglas Keszlar at Oregon State University in Corvallis, who is studying the photovoltaic potential of fool’s gold– pyrite – and discovered instead that some more ordinary materials could make improved photovoltaics, especially iron silicon sulfide. Once again, the advantage would be that it’s hyperefficient and cheap.

All of this goes to reinforce a recent study by Joshua Pearce at Queen’s University in Kingston, Ontario, who found that cost estimates for solar technology used by energy analysts are greatly inflated. The technology is changing so fast that many studies don’t reflect the newest realities. For instance, the cost of solar panels has dropped 70% since 2009, and their productivity only declines 0.1% to 0.2% per year, rather than the 1% per year that was the norm.

All in all, plenty of reason to get excited about a clean energy future. Keep ’em comin’, science nerds.