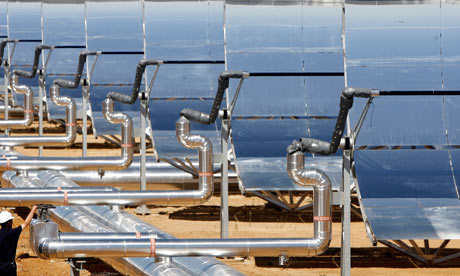 South Africa has released plans to establish a solar power plant that would become the largest in the world. The project aims to go partially online by 2012, at which point it would produce 1 GW of energy for the national grid. Within ten years it plans to achieve annual output of 5 GW, which would meet one-tenth of the country's energy demands.

This is a wonderful piece of news from a country that currently receives 90% of its energy from coal, with 17% of the population having no access to electricity. The project will use giant mirrors and solar panels to channel the power of the sun in the Northern Cape province, which is one of the sunniest places on the planet. If the project proves to be economically competitive with other energy sources, the South African government is sure to further expand its solar network.