The Dire State of US Garment Manufacturing 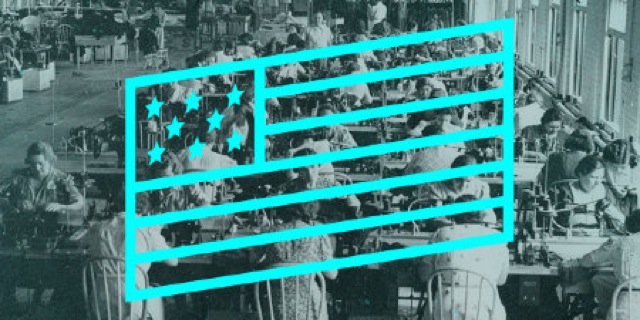 It’s no secret that, as a whole, the U.S. manufacturing industry is in a bad state. And when it comes to garments, the scene is particularly grim.

Since its peak just after World War II, apparel manufacturing in America has experienced a long, steady decline. In 1980, one in ten American manufacturing jobs were held in the clothing industry. By 2007, 95 percent of apparel bought in this country were imported from overseas.

In an enlightening Ethical Style post at GOOD, Tabea Kay and Jessica de Jesus break it down for us:

Since [the 1950s], apparel technology has barely advanced. The production of clothes today is still largely identical to the 1850s process: a sewer sews on a sewing machine. “Mass production” meant a shift from tailored to standardized, and the introduction of division of labor (one person sews collars all day long). But the work of making clothes remains highly labor-intensive. In the ’50s and ’60s, this meant mass retailers began relying on cheaper Asian labor practices to produce their own, U.S.-designed clothes. By the mid-1980s, the bulk of American apparel manufacturing had moved overseas.

Meanwhile, mass produced, standard-sized garments took the place of custom, tailored clothing. And an economic downturn in the 1970s fueled consumer demand for cheaper fashion basics produced — where else? — overseas.

Then advertising entered the picture:

Nike, Levi’s, Calvin Klein—with the movement of production overseas, the race at home was to capture the imagination, and dollars, of the American consumer. Companies were no longer selling clothing—they were selling a lifestyle. The supposed glamour of fashion had gone public, and the race for trends had begun. The demand for more clothes, faster, has increased ever since.

Nonetheless, there is reason for optimism. A small-scale resurgence in demand for US-made clothing is underway. Big companies like Brooks Brothers and New Balance, along with a bunch of smaller independents, are satisfying the growing demand for quality clothes that are fairly made, right here in the USA. “Perhaps someday,” write Kay and de Jesus, “the values underpinning our reliance on mass production will falter, and we’ll dress to a new paradigm: Quality over quantity.”