The Value of Trees 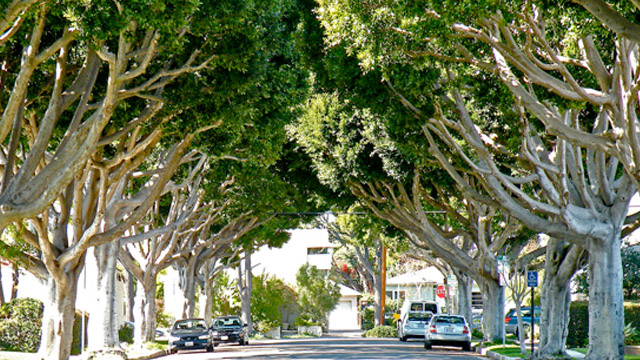 “The tree which moves some to tears of joy is in the eyes of others only a green thing that stands in the way.” – William Blake

In Santa Monica, city officials are moving forward with a plan to remove 54 mature fig trees as part of a new urban design project. Artist Gillian Ware, who divides her time between the UK and Los Angeles, caught wind of the plan, and made a swift transition to activist, joining the movement to save the trees.

On a purely scientific level, there are a number of reasons to want trees in cities. In an article for Soiled and Seeded, Ware lays them out:

We know that in an urban environment trees remove carbon dioxide and air pollutants. They produce oxygen and act as a carbon sink, removing carbon and storing it in their trunks, branches, leaves and roots. They provide shelter and fruit for wildlife, reduce storm water runoff, prevent soil erosion and reduce energy consumption by lowering temperatures in the summer and acting as windbreaks in the winter.

Ware has a professional interest in the arboreal world, too. As a photographer, trees are one of her favorite subjects, with their “sensual similarity to the limbs of humans, or prehistoric animals.”

That’s why, she says, we have plenty to learn from the trees in our cities, and why preserving and respecting them is more important than ever.

(via Soiled and Seeded)