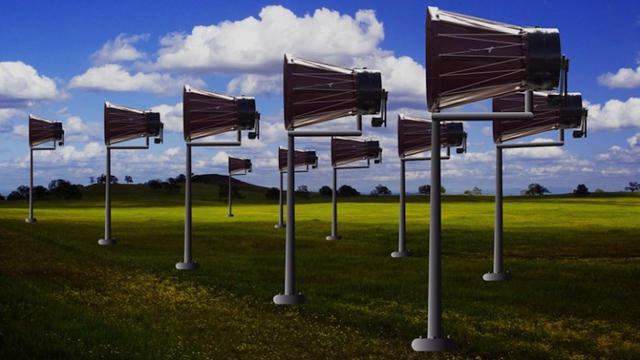 Clean though wind power may be, it doesn’t come without its own environmental concerns, chief among which is the fact that birds and bats share the unfortunate habit of flying into spinning turbine blades.

Raymond Green, an 89-year-old World War II veteran, has developed a new bladeless wind turbine that he claims will save the lives of avian creatures. Carrying the slightly wordy name of Catching Wind Power (CWP) Compressed Air Enclosed Wind Turbine, Green’s turbine tech can be manufactured in sizes from personal use portables to massive units that can used in major wind farm installations.

Unlike conventional wind turbines, CWP’s moving parts are internally mounted behind the windsock and inner compression cone. Green says other benefits of include quieter and lighter weight unit that doesn’t need to be mounted as high as traditional wind turbines.

“Since our turbine compresses the wind, it can be mounted lower to the ground, allowing for safer installation and maintenance while still at least doubling the energy it creates.”

The Compressed Air Enclosed Wind Turbine was created at an estimated cost of US$550. Green has teamed up with New Jersey-based Sigma Design Company to bring the product to market. The process of perfecting the design and manufacturing is expected to take up to two years.