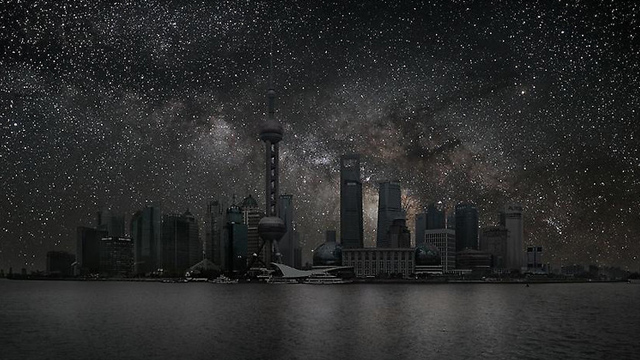 There are plenty of reasons to love living in the city, but star-gazing isn’t one of them. French photographer Thierry Cohen rectifies the urban light pollution problem with Darkened Cities, a photo series depicting famous city skylines with the lights shut off.

To make the images, Cohen blended photos of city scenes–altered to eliminate lights–with photos of night skies from less populated places located on the same latitudes. Presto! No light pollution. The pictures will be exhibited in March at New York’s Danziger Gallery, which explained the project in a news release:

As the world rotates around its axis the stars that would have been visible above a particular city move to deserts, plains, and other places free of light pollution. By noting the precise latitude and angle of his cityscape, Cohen is able to track the earth’s rotation to places of atmospheric clarity like the Mojave, the Sahara, and the Atacama desert. There he sets up his camera to record what is lost to modern urban dwellers.