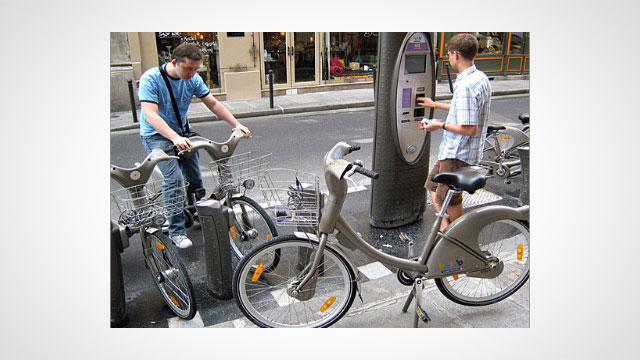 Good news on the city transportation front, as three U.S. cities get ready to set the wheels in motion on large-scale public bike share systems. Denver, Minneapolis, and Boston will join Washington D.C. this year as the first U.S. cities to adopt bike rental programs.

Generally, bike share works like this: Users pay an annual or monthly subscription fee and receive a membership card, which they swipe at stations to take a bike. After their rides, users may drop off bikes at the same or any other stations dotted around the city.

Bike sharing programs are widespread in Europe. In Paris, around 100,000 use the Velibâ€™ system every day.

In car-mad North America, bike share is a relatively new transporation planning development. Great to see cities giving it a try. Here's to hoping other U.S. cities are watching.

Photo: A Velibâ€™ station in Paris