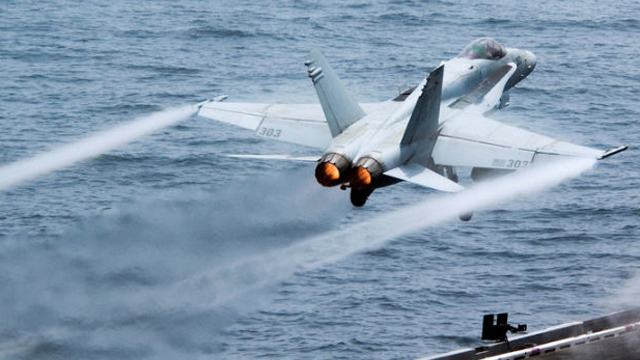 There is something strange and perverse about the fact that a well endowed national defense budget means good things for the environment. It seems like some of the biggest developments in clean tech over the past few years have come from military research labs. In the latest bit of news, the U.S. Navy announced that its research arm has come up with a way to convert seawater into jet fuel.

The method involves extracting the carbon dioxide from seawater to produce pure hydrogen. Then, using something called an electrochemical acidification cell, they’re able to convert the carbon dioxide and hydrogen into hydrocarbons that can be used for jet fuel. Here is the scientific explanation:

NRL has developed a two-step process in the laboratory to convert the CO2 and H2 gathered from the seawater to liquid hydrocarbons. In the first step, an iron-based catalyst has been developed that can achieve CO2 conversion levels up to 60 percent and decrease unwanted methane production from 97 percent to 25 percent in favor of longer-chain unsaturated hydrocarbons (olefins).

In the second step these olefins can be oligomerized (a chemical process that converts monomers, molecules of low molecular weight, to a compound of higher molecular weight by a finite degree of polymerization) into a liquid containing hydrocarbon molecules in the carbon C9-C16 range, suitable for conversion to jet fuel by a nickel-supported catalyst reaction.

The advancement is part of a naval effort to develop home-bred biofuels to reduce reliance on foreign oil. Converting seawater to biofuel could bring down the cost of the fuel to about $3 to $6 a gallon. Conventional military fuels run about $3.40 per gallon.

However, as Treehugger points out, the resultant fuel isn’t really any more environmentally friendly than conventional jet fuel, since it’s still the same blend of hydrocarbons. That said, it would reduce the energy used to transport the fuel out to sea, and it wouldn’t need to be pulled out of the ground, refined, and stored for shipping like oil.