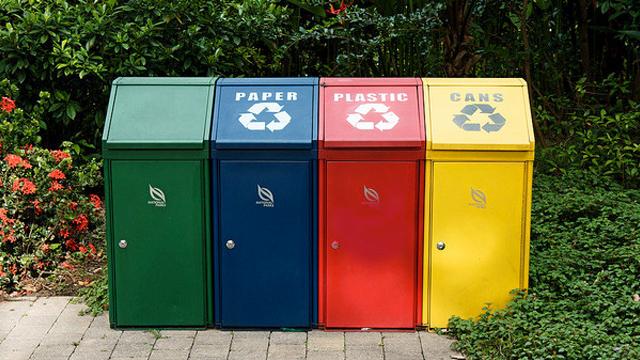 What if there were something that could create 1.5 million new jobs, reduce carbon emissions equal to taking 50 million cars off the road, cut dependence on foreign oil, increase exports, save water, improve air quality and reduce toxic waste? What if it were low-cost and readily implemented? Wouldn’t everyone do it? At a time of wildfires, droughts and persistent unemployment, wouldn’t it be a centerpiece of the presidential campaign?

Well, there is such a thing. It’s called recycling. You might ask: Don’t we already do that? We think we do, but most of the time, we don’t. Nationally, only about a third of municipal solid waste is recycled. (In New York City, it’s 15 percent.) And, even when Americans make the effort, we frequently make mistakes that contaminate recyclables — throwing that plate of spaghetti in with those newspapers — so that contents of recycling bins become un-reusable and end up in landfills.

The numbers in the first paragraph come from a report prepared by the Tellus Institute for the Natural Resources Defense Council and other groups entitled “More Jobs, Less Pollution” that estimates the impact of raising the country’s recycling rate to 75 percent. Is this possible? To be sure, it would take a sustained national campaign backed by government incentives and regulations, the kind that have proven effective in many cities.

Most people have only a vague idea of the benefits of recycling. When we don’t recycle, we waste huge amounts of water and energy, for example. If you recycle just one aluminum can every day for a year, it saves the energy needed to run a television for 711 hours, roughly four hours a day for six months (not that I’m advocating that much TV viewing). You can do your own fun calculations using this E.P.A. tool.

Moreover, recycling is great for a struggling economy because it is labor intensive. Recall Economics 101: the three factors of production are land, labor and capital. When we recycle, we switch from land (natural resources) to labor. Recycling needs people to collect, sort, process, compost and prepare materials. Even though two-thirds of the nation’s waste goes into landfills, 85 percent of all the jobs associated with waste come from recycling and reuse activities (pdf p.5). Recycling creates jobs that won’t be sent offshore.

So why don’t people recycle more? It’s easy to blame apathy, but often people neglect to do the right thing because they’re confused. Research on behavior change emphasizes the need to make desired behaviors as simple as possible — removing the need to make decisions, so people act reflexively.

That is why one of the most important environmental fixes taking root today is an initiative to standardize recycling labels. It’s only one piece in a complex puzzle, but it’s such a central piece that it seems amazing it’s been overlooked for a generation.

“For years, with recycling, we’ve been focusing on trigonometry and forgetting about one plus one,” says Mitch Hedlund, the founder of Recycle Across America (R.A.A.), a Minneapolis-based organization that is leading this initiative. She adds: “I go to recycling conferences where the bins say ‘Recycle Only’ and even the people there have to look inside and ask, ‘Should I put newspaper in or just cans?’ If it’s confusing for people in the industry, why would we expect that the general public will do it?”

Hedlund believes that this problem will not be solved until recycling becomes automatic, like slowing down when you see a stop sign, for all the actors who play a role in the solution — consumers, janitors, building managers, waste haulers. “Imagine what would happen if everyone was responsible for creating their own stop signs,” Hedlund said. “That’s what you have with recycling.”