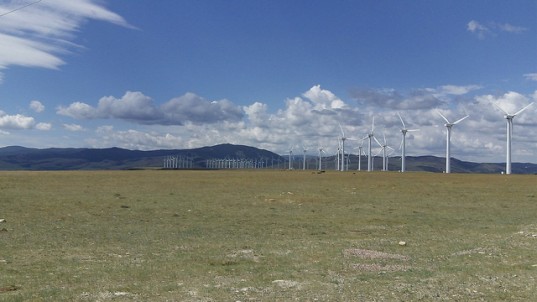 Construction on Mongolia’s first wind farm is set to begin next week. The $120 million project will meet 5 percent of the nation’s energy demands. The 50 megawatt wind farm is the first-ever private energy enterprise the arid East Asian country, which currently gets nearly all of its energy from coal.

Mongolia is made up of a vast desert, with abundant opportunities for renewable energy production. According to the National Renewable Energy Laboratory in the U.S. and the National Renewable Energy Center of Mongolia, Mongolia could generate 2.6 terawatts of renewable energy per year, which would account for 25 percent of global demand. Project leaders are hoping that once the energy needs of Mongolia are met with renewable sources, the country can become the center of a clean energy super-grid connecting Russia, China, Korea, and Japan.

Because Mongolia is so rich in coal deposits, which are relatively cheap and easy to exploit, getting the wind project off the ground has been an uphill battle. But Bayanjargal Byambasaikhan, the chief executive of the majority stakeholder in the project, says the country’s wind potential is enormous.