Blue Hill’s Dan Barber Is Reimagining the Future of Restaurants 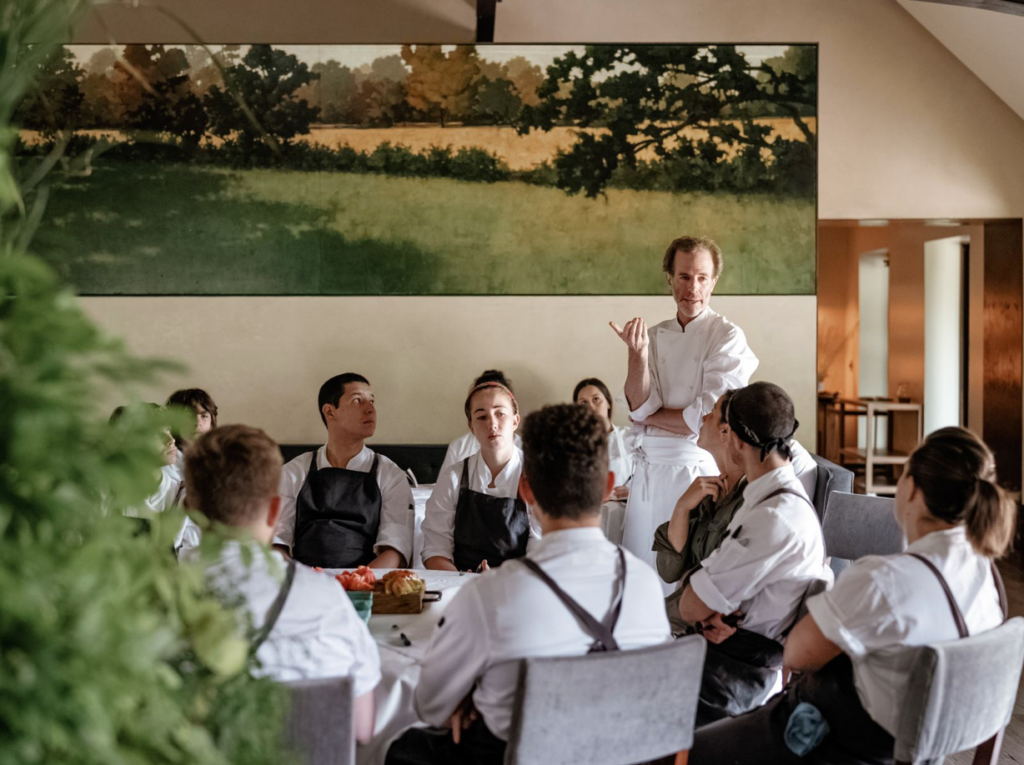 Blue Hill at Stone Barns has never been a conventional dining spot.

The sprawling, two-Michelin-star restaurant exemplifies the farm-to-table model more than just about any other place on earth; for starters, it’s located on a literal farm just north of New York City that doubles as an education center. Chef Dan Barber has long been an outspoken champion of sustainable agriculture, advocating for chefs to embrace cost-effective crops like buckwheat instead of imported heirloom tomatoes. He has used energy created from a towering compost heap to soft cook eggs, and turned food scraps into dinner.

Now Barber and his team are tearing up the standard way of running a restaurant in an attempt to fix big-picture issues like sustainable farming, the difficult economics of restaurants and notoriously punishing kitchen work environments.

Employees at Blue Hill at Stone Barns are spending 40% of their time on research and development, and education. The other 60% of their time will be devoted to the conventional running of the restaurant. They’re working on everything from a grain-based sugar that could potentially replace the white cane variety to the creation of kelp products to serve at the restaurant or sell at markets. There are about three dozen projects in development.

Devoting some resources to R&D has become standard practice for restaurants, especially after the pandemic forced places to think outside the box. (Momofuku has made seasoned salt and packaged noodles a big part of the growth plan since 2019.) But those projects invariably are manned by workers outside the restaurant. Barber is paying employees to research these projects on days the restaurant is now closed.

Barber believes these experiments, which all of the restaurant’s approximately 45 staff members are working on, have the potential to make money through avenues like compensation for intellectual property. Diversifying revenue has become more and more important to help fund the increasingly challenging business of keeping a dining room solvent, given staffing and inflation issues.

Before the pandemic, Blue Hill at Stone Barns was open five nights and for two services on Sunday, at lunch and dinner, and served at least 100 diners a night. It is now only open from Wednesday to Friday, for one seating a night, serving the $398 set menu to 45 or so guests. Staff members now dedicate the shuttered two days to product development.

“It would be much easier to be open five days a week,” Barber says. It is “crazy expensive,” he says, to have the staff spending two days each week thinking big about products that can potentially tackle big issues like agriculture and hunger.

The work on these products, through the “Summer Session” that runs from June to November will cost about $400,000, according to Dan’s brother David, co-owner of Blue Hill and a partner at the tech investment firm Astanor Ventures. That includes the costs of labor, food testing and the lost revenue of three extra services. “It’s a lot of money,” says Barber, who is in talks with companies like Restaurant Associates about investing in some of the products in development. He’s also planning the next series of winter sessions.

But he’s adamant that he won’t return to a five-day-a-week restaurant. “That doesn’t help with an environment that you’re psyched to work in,” he says.

Earlier in the summer, the company came under fire for grueling workplace conditions. An Eater article in July, “Chef’s Fable,” by Meghan McCarron, chronicled the stories of almost 20 past employees who felt scarred by their time at the restaurant, including a cook’s allegation of being sexual assaulted by a member of kitchen management.

Barber says there’s some truth to the Eater story. “I was particularly driven, from around 2011 to 2015. It was a pressurized environment that people gave a lot up to be a part of,” he says. “There were apparently people who left who weren’t happy and the experience didn’t justify what they went through. I knew it then, and I own it, and I was too slow to act on it.”

By the end of 2019, he says, there was a plan in place to change the work environment. Now, he says he will “never to go back to that. I feel regretful about it.”

Even before the pandemic changed the dynamics of restaurants around the world, Barber had started to re-imagine how his Blue Hill restaurant would operate. “A lot of this is because a lot of the cooking we do, it’s not sustainable,” he says. “And Covid and the recognition of the toxicity around restaurants, and that drive and pressure, it’s not healthy in any way: physically, mentally.”

Barber is working to channel his energy into the staff projects. Each one is sketched out in the kind of minute detail that might bring to mind an MIT graduate thesis, taking into account everything from the footnoted history of a product, to its chemical make up, a timeline for testing the product, resources and an appendix of reading material.