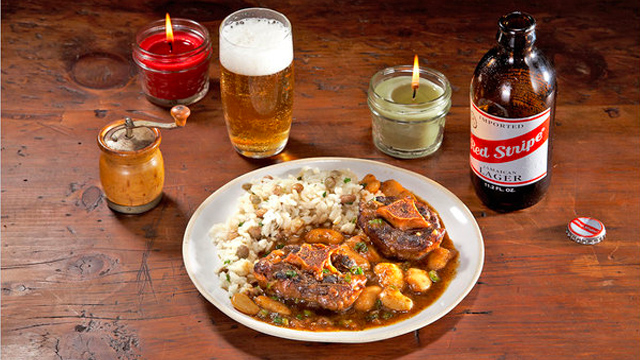 Ah yes, February, that regrettable time of year when, after several months of cold weather, you have to face the equally cold truth that Old Man Winter isn’t going anywhere anytime soon. The easiest — and most delicious — way to transport yourself to warmer climes is via tropical cuisine. In this week’s NYT Mag, Sam Sifton dishes up a recipe for a hearty Caribbean Oxtail Stew that’s the culinary equivalent of a warm blanket.

All of the ingredients are easy to find in local and organic variations. Start with your local sustainable butcher, then hit up your neighborhood market and start warming your bones.

1. Season oxtails aggressively with salt and pepper. Heat a large Dutch oven or a heavy-bottomed pot over high heat. Add brown sugar to pot and melt, stirring with a wooden spoon, until it darkens and starts to smoke ­— about six minutes. When sugar is nearly black, add 2 tablespoons boiling water. (It will splatter.) Stir to mix.

2. Add the oxtails to the pot, working in batches, stirring each time to cover them with blackened sugar, then allowing them to cook, turning occasionally, until they are well browned. Remove oxtails to a bowl and keep warm.

3. Add half of the onions, garlic and ginger to the pot, along with the pepper, the thyme, the allspice and a third of the scallions, and stir to combine. Allow to cook until softened, approximately 5 minutes.

4. Return the oxtails to the pot along with any accumulated juices and put water into the pot so that the oxtails are almost submerged. Bring to a simmer and then cook, covered, approximately 1 hour, stirring occasionally.

5. Add remaining onions, garlic and ginger to the pot, along with another third of the scallions. Add sugar, soy sauce and Worcestershire sauce. Stir to combine and continue to cook until the meat is yielding and loose on the bone, approximately one hour longer. Remove approximately one cup of liquid from pot and place in a small bowl. Add flour to this liquid and stir to combine, working out any lumps with the back of a spoon. Add this slurry to the pot along with ketchup, then stir to combine and allow to cook a further 15 minutes or so. Remove Scotch bonnet pepper and thyme stems. Fold butter beans into the stew and allow these to heat through. Scatter remaining scallions over the top. Serve with white rice or rice and peas. Serves 4. (Adapted from Golden Krust Caribbean Bakery and Grill.)