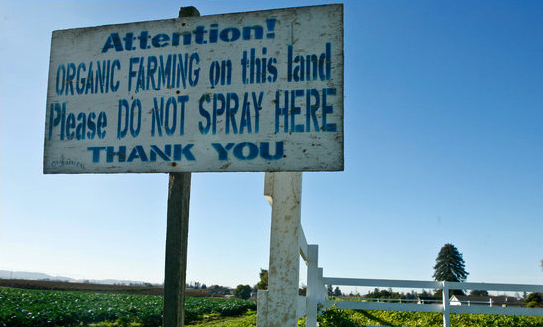 Since the 2008 U.S. farm bill, annual funding for organic farming research has increased from $3 million to $20 million. With more research dollars, scientists and farmers are delving deeper into organic pest control techniques and gaining a better understanding of the larger natural systems at work.

Wild sunflowers, for example, are being planted not as a cash crop but as a home for beneficial bugs that prey on bad bugs. Similarly, lettuce farmers are planting alyssum, an ornamental flower that attracts hoverflies, which are voracious predators of aphids and other veggie-eating pests.

Animals, too, are being used to control pests. In rural areas, demand is on the rise for bats, which can eat their body weight in pest insects like cucumber beetles, stinkbugs, and codling moths.

Since there's no such thing as an organic herbicide, scientists have been looking into other methods for keeping weed populations down. New research shows that planting a cover crop like fava beans can dramatically reduce weed populations.

The quest continues for a food system that's perfectly balanced with nature. But we're definitely getting closer. And that's a good thing.