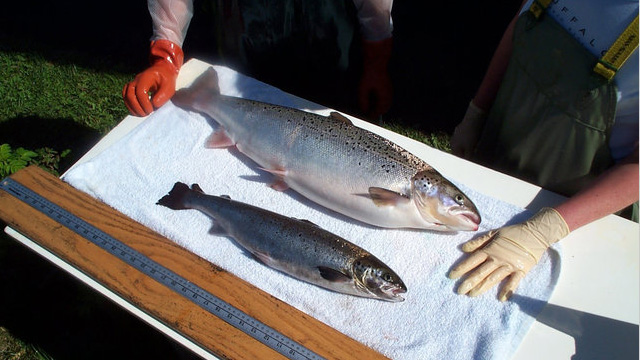 The ongoing controversy surrounding genetically altered foods is shifting from the plant world to the animal one. The New York Times reports that AquaBounty Technologies has engineered a salmon that is nutritionally identical to wild salmon but can reach market size in 16-18 months instead of three years. This technology would enable fish farms to become much more profitable as they would be able to produce a much higher volume of fish. Proponents say that it would also reduce stress on the environment since the fish use fewer resources to grow (the maturation rate is based more on genetics than food consumption).

However, many food safety groups and scientists have expressed concern that the fish could be unsafe for consumption and outcompete wild species, creating negative long-term affects on salmon species and marine life in general. In addition, it seems unlikely the FDA would change the genetically engineered labeling policy, so there would be no means for the consumer to determine if the salmon was genetically engineered or not. The FDA is currently reviewing the technology, and it could be approved within the next few months as it has already passed the first few states of approval. As more information becomes available and decisions are made, the FDA says it will present it to the public. If you ask me, it seems there is something fishy about this one.

Photo: A gene-engineered fish, top, and a natural one of the same age. (AquaBounty)