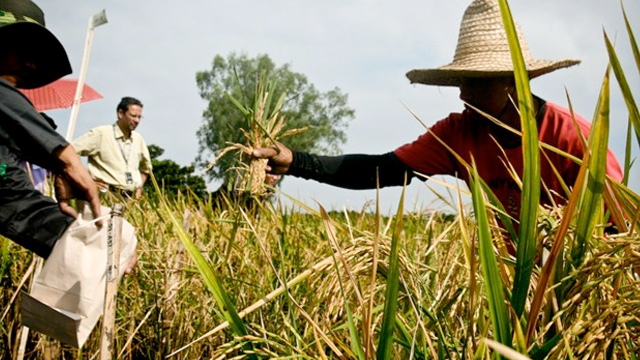 Earlier in August, a group of protestors descended on a rice field in the Bicol region of the Philippines, smashing down the fence surrounding it before uprooting the crop. Their target: “Golden Rice,” so-called because its yellow tint belies the presence of beta carotene, which it has been genetically engineered to produce. Beta carotene is a precursor to Vitamin A, deficiencies of which are blamed for major health problems in the developing world, including blindness in 250,000 to 500,000 children per year.

The event in the Philippines is but one front in a wider battle over the merits of genetically modified crops. The protestors there believe that Golden Rice could pose unforeseen risks to human and environmental health. They view its development as basic profiteering by big agrichemical companies.

“A handful of corporations in developing countries has reaped billions in profits selling genetically modified seeds and proprietary herbicides,” says Neth Daño, who works in the Philippines for the ETC Group, an advocate on behalf of small farmers. “Yet those companies have always claimed that this technology would benefit the poor.”

But the Golden Rice research is not in fact backed by corporations, as Mark Lyman reported from the scene:

“There’s so much misinformation floating around about G.M.O.’s that is taken as fact by people,” said Purugganan, who sought to calm health-risk concerns in a primeron GMA News Online, a media outlet in the Philippines: “The genes they inserted to make the vitamin are not some weird manufactured material,” he wrote, “but are also found in squash, carrots and melons.”

Weighing in on Dot Earth, Michael Pollan wrote, “I’m not afraid of it, I just think it’s another glittering Western techno fix. I’m prepared to eat my words if it really saves millions of lives,” before adding, “I certainly think that the research should go forward.”

We are inclined to agree with Pollan’s sentiment, as well as Nathaneal Johnson‘s. Golden Rice is not going to solve the overarching problem of malnutrition among poor, rice-dependent populations. But it does address a specific micronutrient deficiency and it is being developed with the best intentions. The question arises: Would anti-GMO campaigners rather see more children die than see the successful development of Golden Rice?